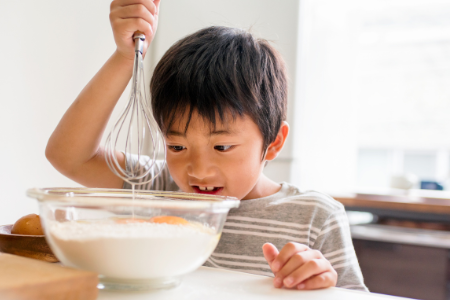 We know what a difference a positive male role model can make to the lives of children.  However 8 year old Sam, living with his grandmother and sister, felt that he had no one special in his life he could turn to.  Having his own Welcare Family Support Worker enabled Sam to explore his feelings in a safe, supportive environment and he learnt how to manage his behaviour, positively impacting the family as a whole.

Sam struggled to control his emotions both at home and school and his grandmother found it hard to parent positively.  She felt overwhelmed and her own physical and mental health were suffering as a result.

It quickly became apparent Sam needed someone special in his life he could turn to to and talk about how he was feeling but first the Welcare family support worker needed to build a good relationship with him.  They did this by playing games and carrying out fun activities including cooking, exploring outdoors and playing games; UNO was a particular favourite. As his confidence and trust developed Sam was able to use these sessions to explore his feelings and behaviour. Using the volcano experiment and a mini explosion we talked about the triggers for his anger and how he could manage his behaviour and this had a dramatic effect on his behaviour at home and school.

However Welcare didn’t just work with Sam.  The same family support worker helped Sam’s grandmother to develop positive parenting and consistent boundaries and routines which meant she had the confidence to manage her family.  She also encouraged the grandmother to spend more one to one time with Sam so that when she stepped away he would continue to have a special person in his life. Welcare supported the family to attend appointments at CAMHS resulting in a diagnosis which helped understand and support Sam’s behaviour.  When Sam was suspended from school for aggressive behaviour the School and Welcare worked together to put in place a Personal Development Plan and subsequently support the family to use it as a tool for giving praise, understanding when the low points were in Sam’s day and put in place strategies to support those low points.

Receiving praise built Sam’s self esteem and confidence and he began to respond differently to difficult situations. He learnt how to regulate his emotions and rather than use aggression to solve a problem will ask for support if he needs it. His grandmother now uses positive parenting and has learnt how to respond appropriately to challenging situations.

Now a stronger family unit it was important for the family to have a positive ending. Over a period of 4 weeks we talked about how far they had come and signposted Sam to where he could go if he needed to talk. On the final meeting Sam was given a stone to hold when he needed to remember the shared fun and positive times.

The family say: “routine has been established for the morning and evening, leading to a less fraught household. Sam has had help to manage his emotions which while not always consistent has meant the family environment is more positive. School outcomes have improved and his behaviour in school is now rarely disruptive”. Sam’s grandmother feels better about her ability to parent in a more positive way and is considerably happier than at the start of the process.

*names have been changed

We couldn’t do the work we do without the valued help of our supporters. Please spare what you can to help people like Sam in your community.

To find out about opening hours or to book an appointment please get in touch via info@welcare.org.